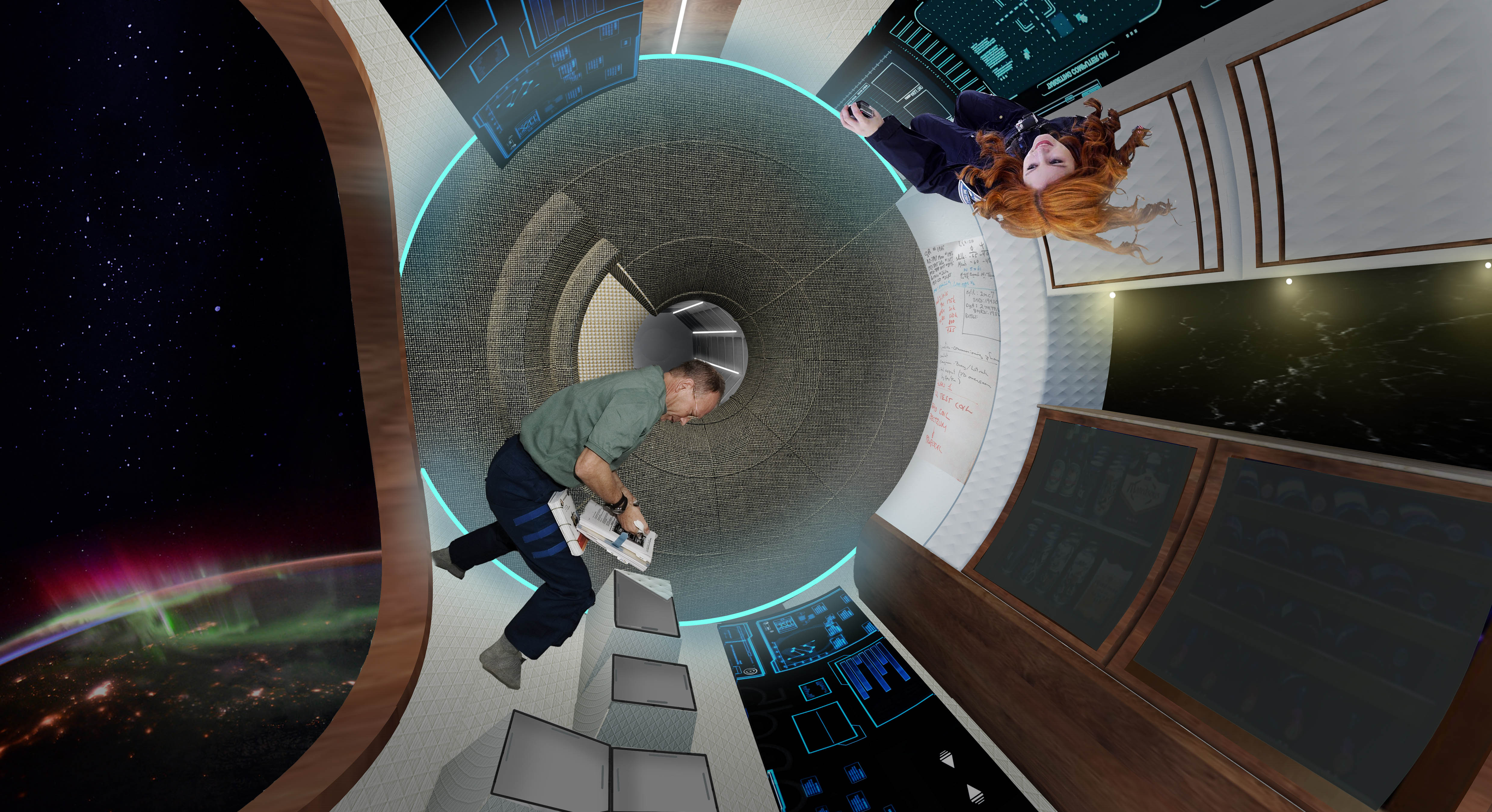 As the space industry shifts toward commercialization, this research examines the design and reuse of a space station to provide efficient access for both research and tourism.
With the end of ISS operations approaching in the mid-2020s, this is a promising time for new commercial opportunities.
‍
With owning four RRV (Reusable Reentry Vehicle) capsules and two large Salyut-Class Spacecraft, a serial space entrepreneur and chairman of an international commercial space company, Excalibur Almaz, Inc, called on Stellar Amenities CEO Anastasia Prosina, and other Sasakawa International Center for Space Architecture (SICSA) graduate students to redesign an interior of an innovative nine-time flight-proven space station. The goal was to provide efficient access to space for research and tourism. By repurposing modernized, tried-and-tested equipment, including a flight-tested spacecraft and reliable launcher, our project was reportedly saving around $2 billion in development costs.
‍
Anastasia Prosina and team members  Ayda Uraz, Austin Kulhanek, Tamalee Basu dealt a minimal volume with conflicting functions that demanded a rigorous process leading to an impressive design that satisfied the client's visions.
We were later on recruited to develop cost estimates, a redesigned business plan, and market research for the Almaz.
SUMMARY

Support the dual function of research and tourism, with a crew of 2-6 for up to one month.
The team examined the demographics, goals, behaviors, and challenges of each user group, their expectations for space activities, and the functions of the space station.

Our challenge was optimizing the interior space for two tremendously different user groups within the limited volume of a Salyut station envelope. 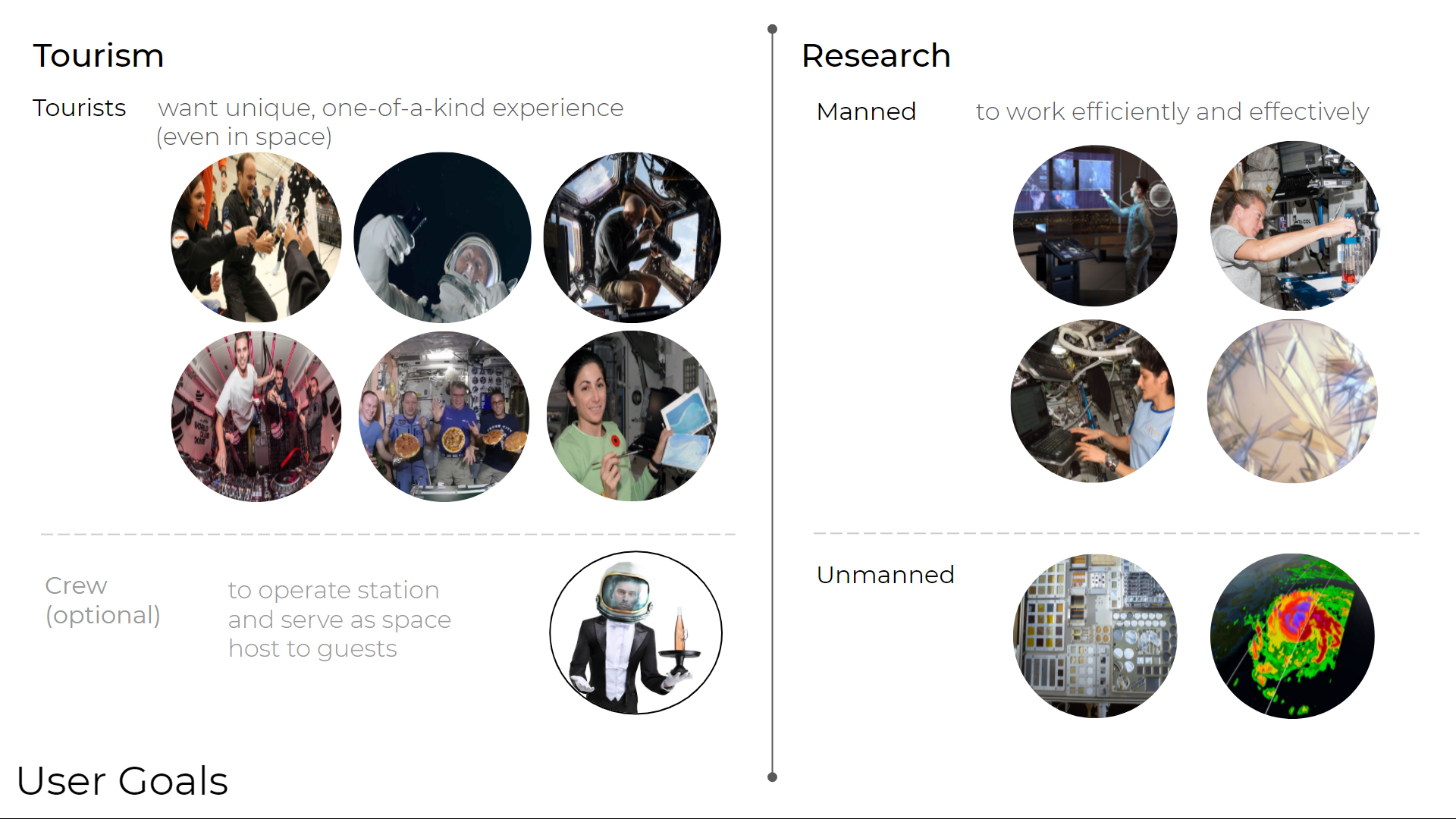 We focused on evaluating requirements, optimizing user experience, examining existent systems and subsystems of the spacecraft.
Our goal was to create a functional and aesthetically pleasing environment for both national and private astronauts, equipped with intuitive design &  futuristic innovations.
Learn More

We framed tourist and research missions occurring with unmanned research operating in the background, continuing until the expert crew is onboard. Tourist missions go on for about two weeks with no intervention of experiments. After the tourist missions, a short turnover period of a couple of days where maintenance protocols for the station are in action. The crewed research missions then follow for three to four weeks where companies and agencies can rent out the station for crewed experiments.

Key Elements of the ConOps:
● 1-2 days for automated maintenance between missions
● Sufficient Reusable Reentry Vehicle (RRV) to support departure and maintenance of people in parallel
● 2-week duration on a tourist trip, 3-week duration on a research trip. The time constraint is due to the absence of exercise equipment & constraint on resources in the limited available volume.
SUMMARY 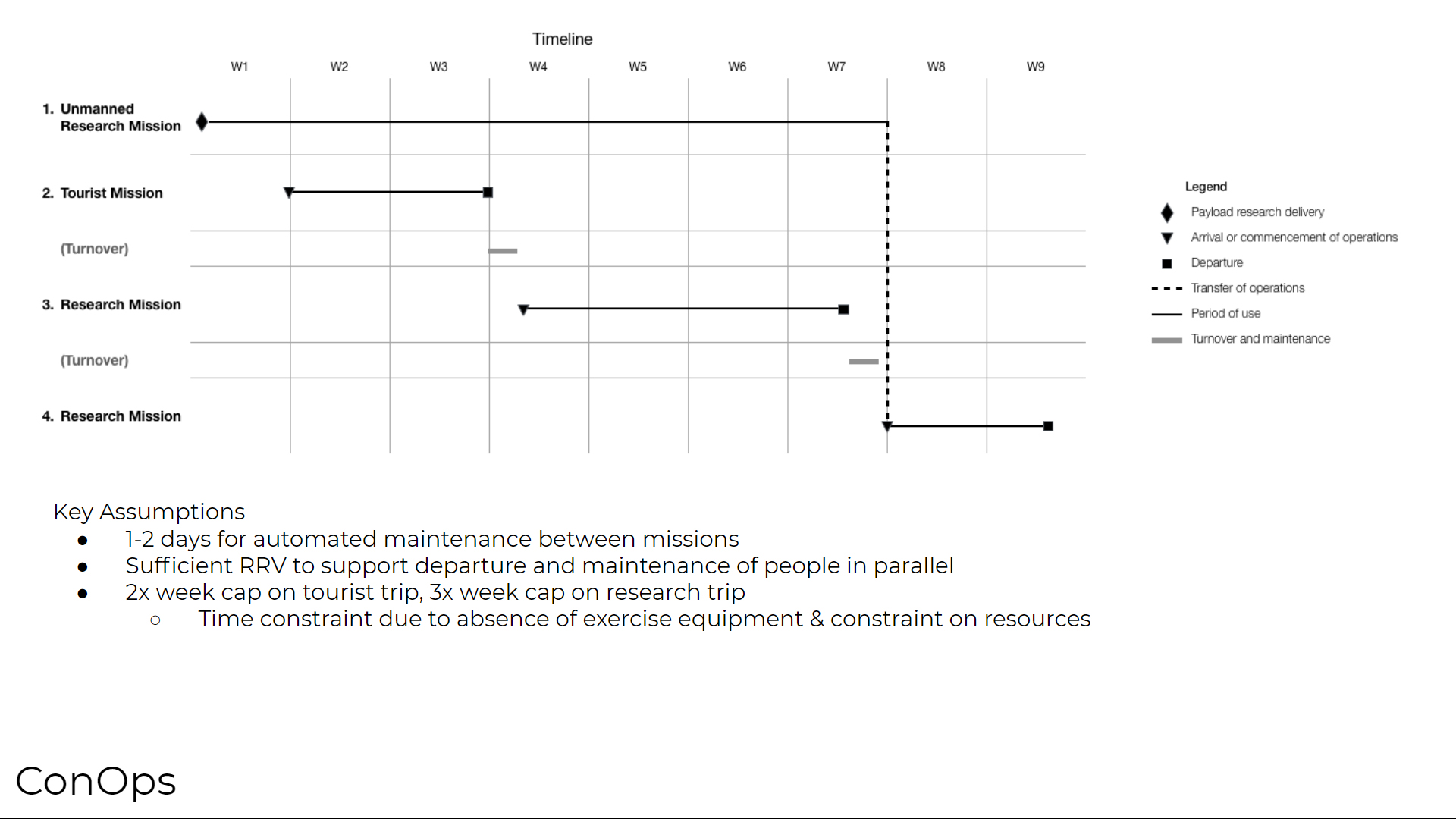 To affect valuable change, design solutions had to acknowledge the spatial limitation, functions, and feasibility in space.
Constraints of the existing spacecraft had a major spatial limitation, whereas the two conflicting user profiles framed the functionality of the interior and the feasibility of design decisions.
Client Requirements
The client’s requirement was to create a cost-effective yet aesthetically pleasing commercial space station. Other factors such as flexibility or multipurpose use of space and the practicality of each design choice are also weighed in the final design. 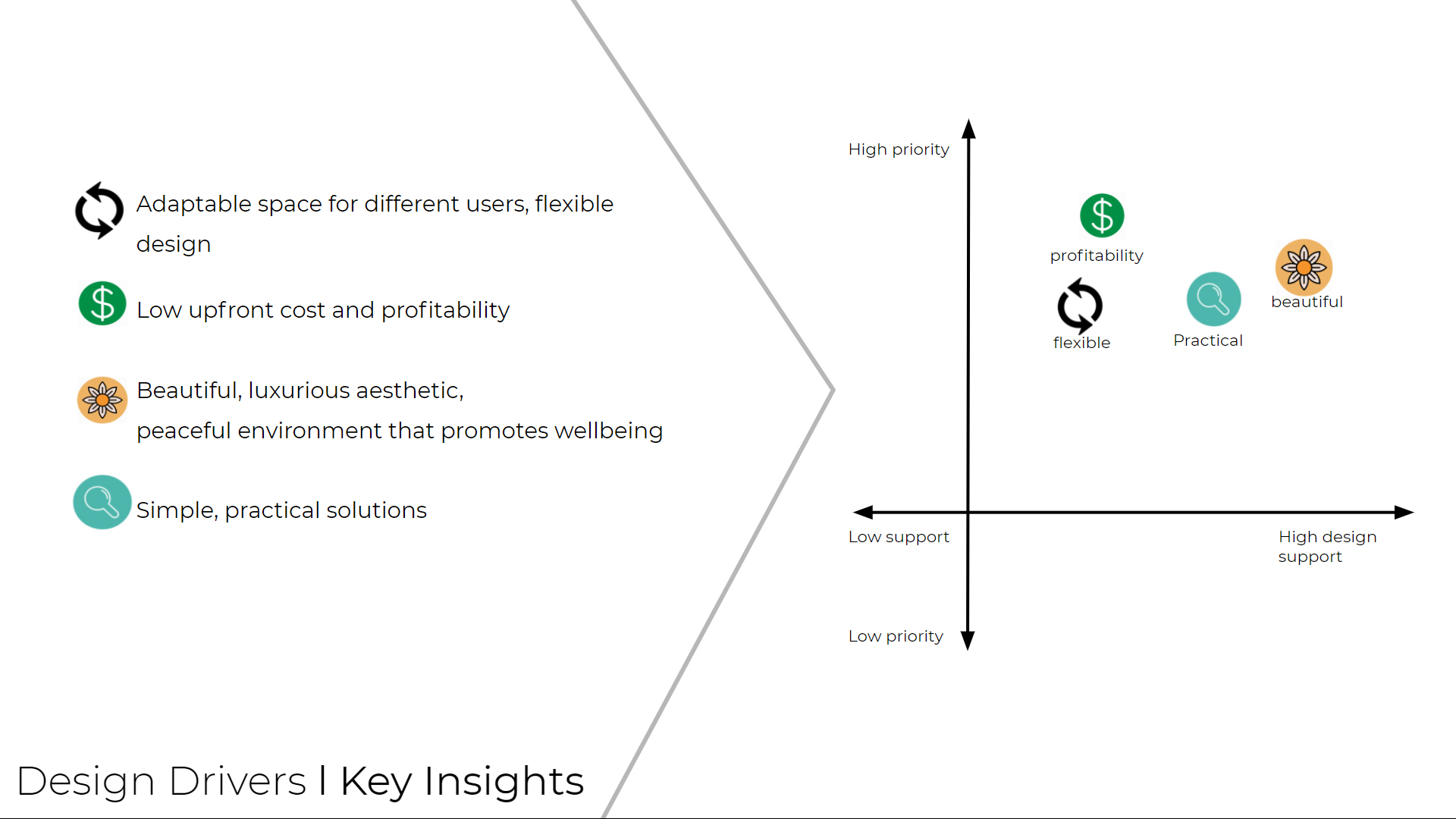 Stressors and Biophilic Design
Suppose one looks at the most widely inhabited space station, the ISS. In that case, the utilitarian interior looks chaotic and does not create an aesthetic or beautiful sense of place, even though it is technologically advanced.

The aim was to enrich interiors that are overruled by engineering priorities, including biophilic design principles. Biophilia refers to the innate human connection to nature that can improve building occupants’ health and overall well-being. Biophilic design works based on the Attention Restoration Theory, which asserts that people can concentrate and perform better after spending time in nature or even looking at scenes of nature. 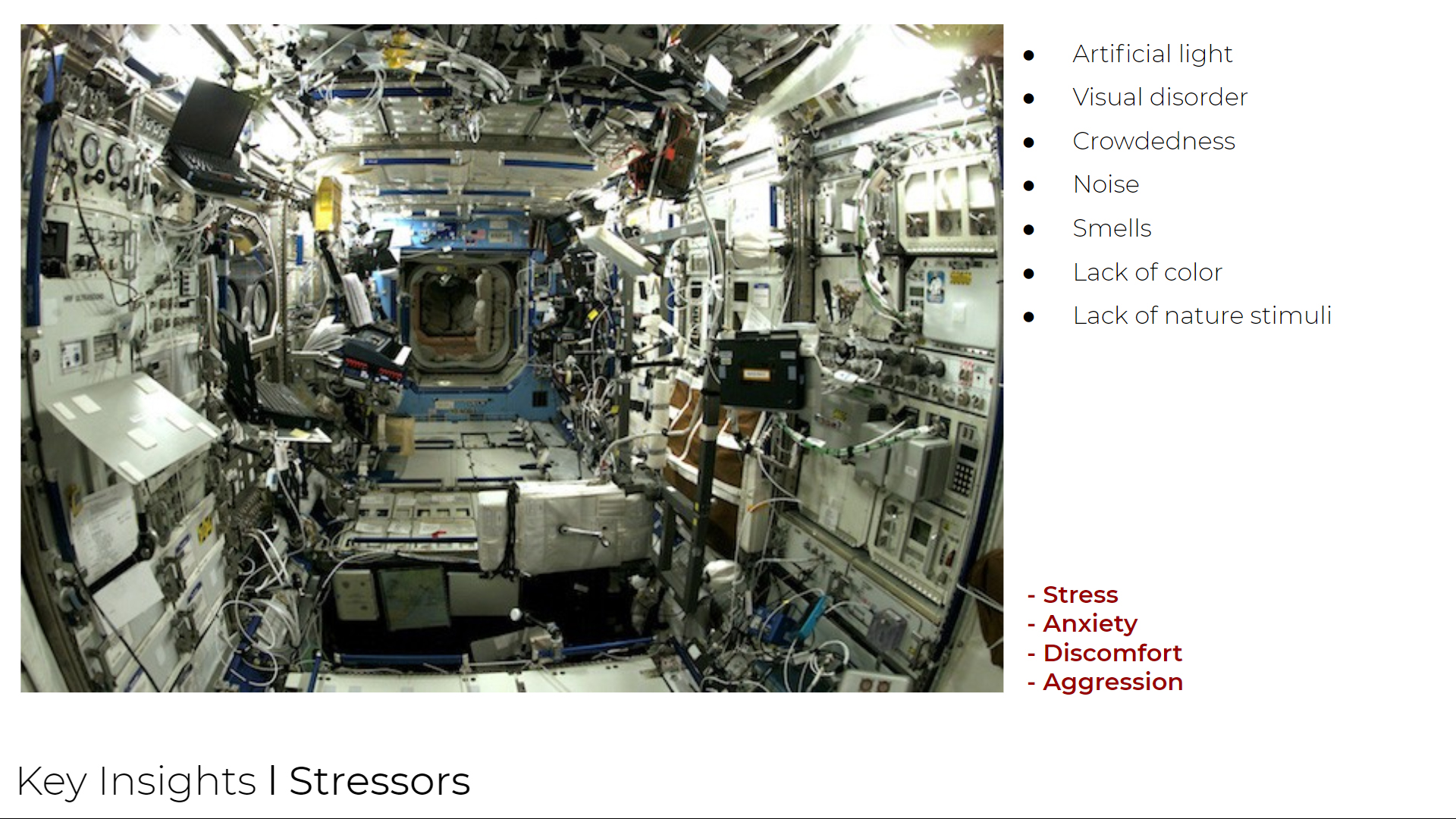 Volume Studies
A major design constraint was the limiting volume of the existing space station shell. The different functional volumes required for varying capacities from a crew of two to six were analyzed with the help of varying volume standards.

Using these standards, a chart was compiled to visualize how the different volume requirements change in the functions for different crew numbers (for the crew of two, four, and six). 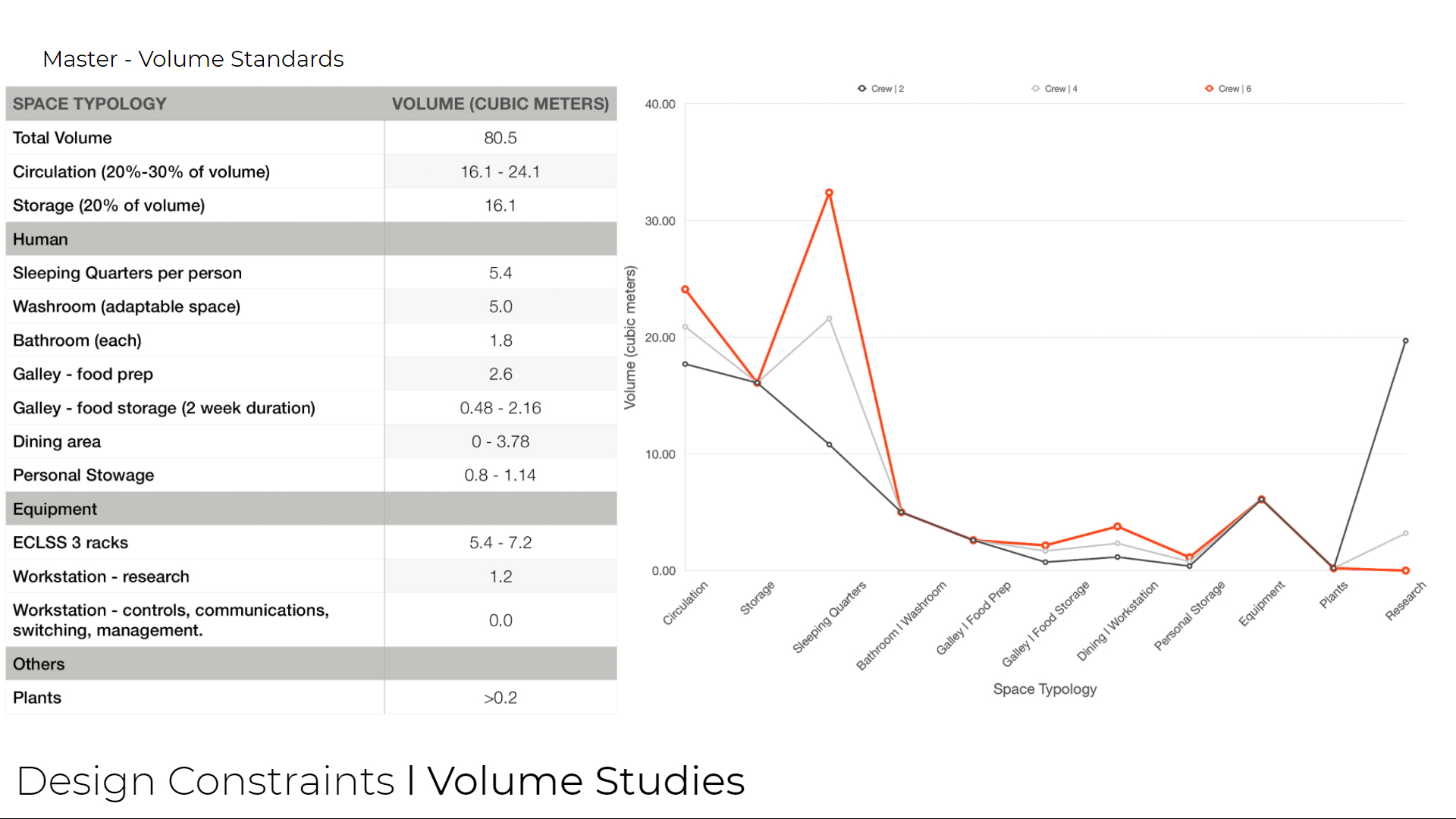 At a crew of six, the model of a balanced volume distribution breaks. With the cumulative total volume being 80.5 cubic meters, the sleeping quarters took up a massive amount of space. Optimizing the volume model solely based on adequate research space was not an answer since then the space allocated for crew quarters becomes void.

This trial and error method led us to choose the optimized number of crew, i.e., four, where the different functionalities could co-exist without massively reducing one another.

The outcome of this optimized volume distribution is shown in the table above.The sleeping quarters’ arrangements presented the most significant challenge because they take up the most amount of space, and they do not use spaces for the entire time. This led to the decision to avoid permanent sleeping quarters.

Hence, the workstation was made into a flexible space that could become an extension of the galley, as the storage and dining area for the tourists, when not in use for research missions.  Through overlapping spaces that have multifunctional use, we created universal use, optimized for both users.
SUMMARY 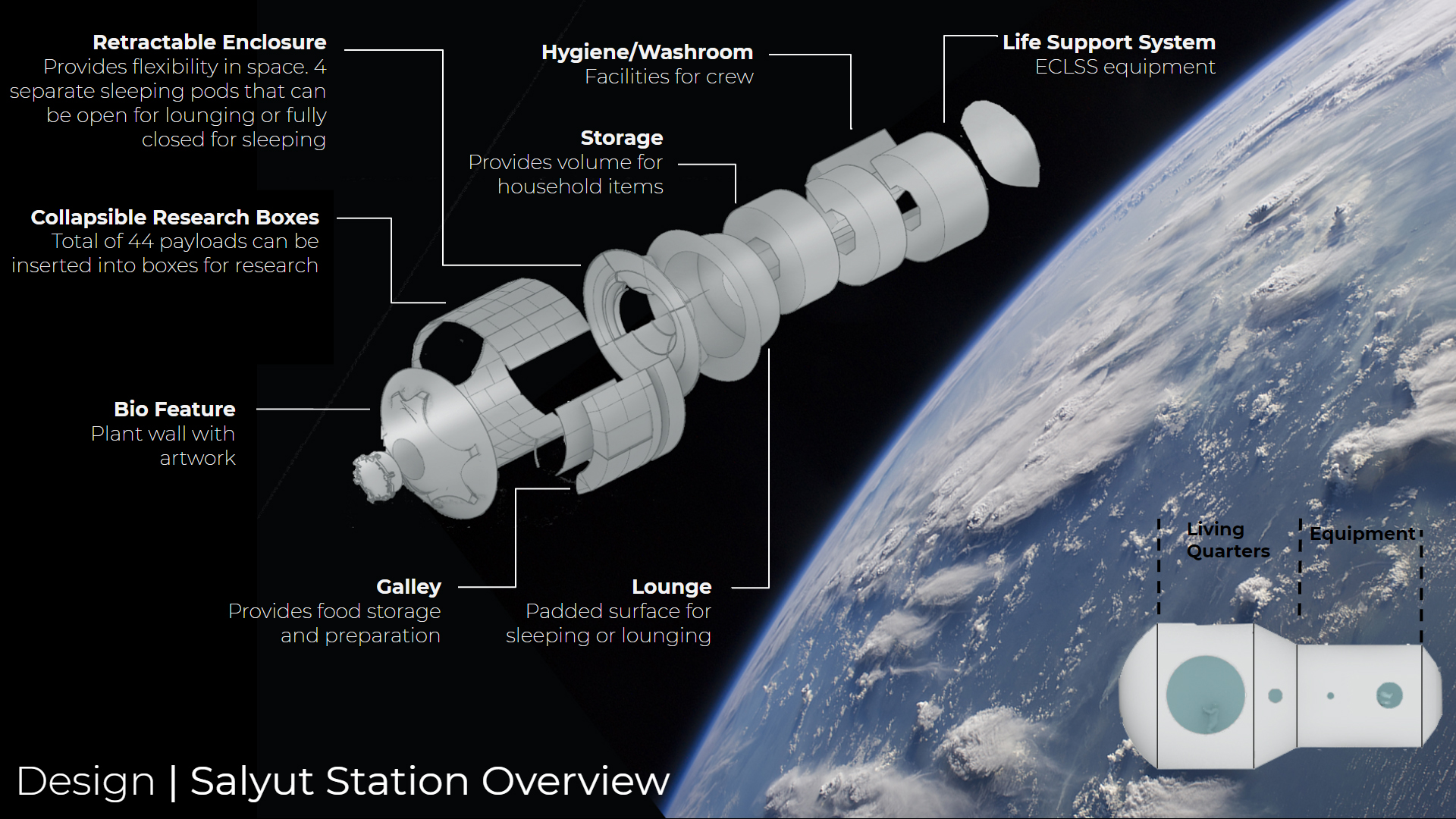 The space station geometry guided us to separate two aspects: Utilitarian Space & Habitable Space.
Unlike the Salyut interior design, where lavatory and habitation zones are close to noisy equipment such as the Environmental Control Life Support System (ECLSS), the Hygiene/Washroom in the Almaz station is far from the place of the permanent human presence. The retractable enclosure serves as a passage link between Habitable and Utilitarian Spaces.
Design Features
Retractable Enclosure

The retractable sleeping quarter reduces the volume required to create a universal space during the day. It operates in two modes. At night, it serves as an embracing element to create sleeping quarters that secure the privacy of users. Over the lounge area, this retractable enclosure operates like the top of a convertible car.

During the day, it is stowable inside the volume of the lounge to recover the volume. The lounge becomes a center of attraction to gather and float around.

This stowable enclosure can be driven by the manual operation of users or/and programmed automatics. The sleeping bag has practical and emotional use: on the one hand, placed inside the enclosed volume, it provides an additional soundproofing feature. On the other hand, within the station-cramped environment, it promotes comfort as a reminder of home.

Collapsible research boxes are intended for storing materials and tools used in experiments on the space station. The boxes are strategically located in the center of the living quarters so that researchers can still benefit from the open space and window view.

Considering some materials require a specific storage environment, the back panel contains a power, data, and water connection. Unlike the standard ISS research boxes, which are rigid and not reconfigurable, the new design is collapsible and can fit standard single or double-sized components. During research missions, they are popped open. When not in use, they can collapse back to recover the volume. 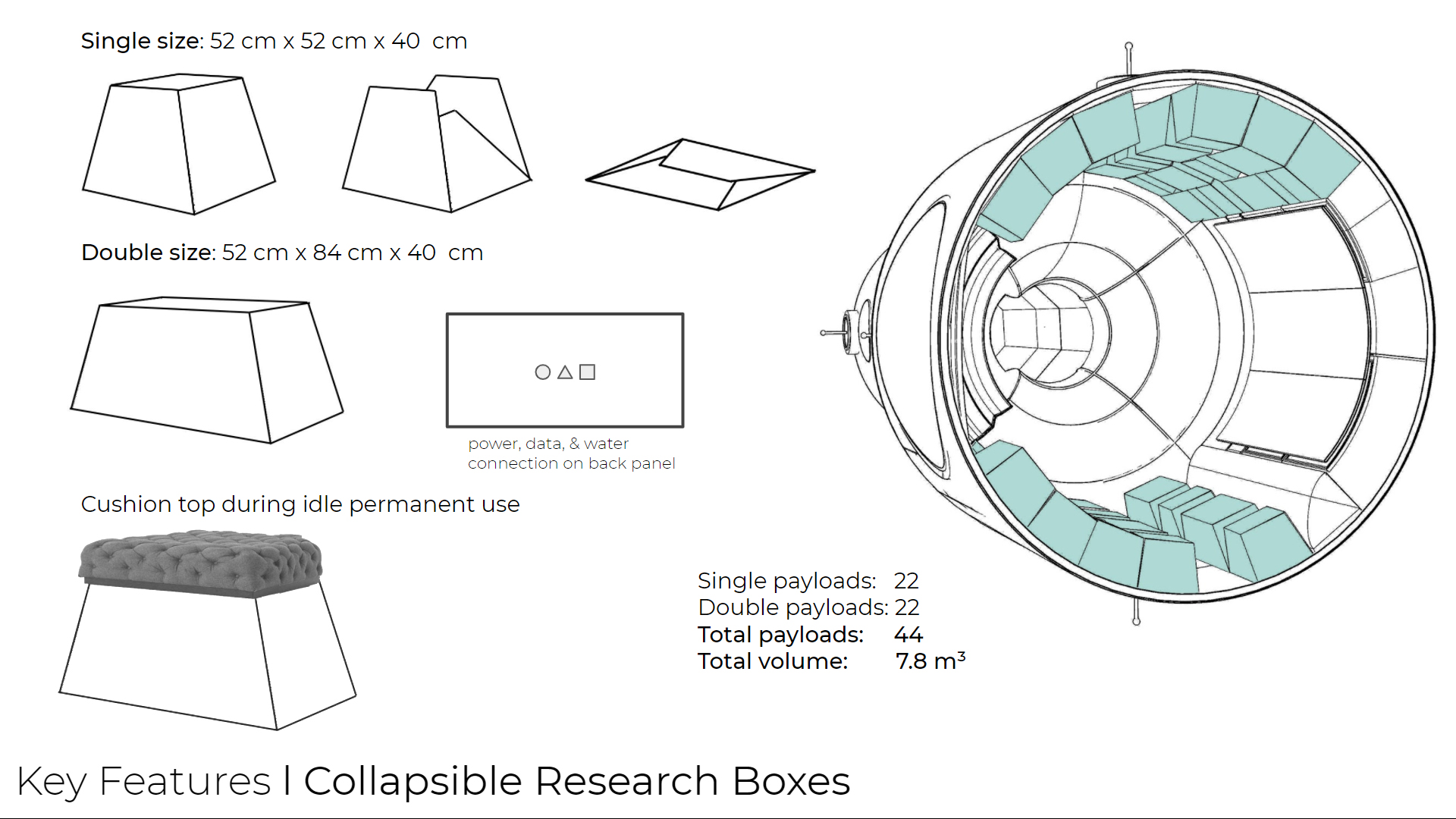 The smart touch screen separates into three sections and revolves around a rail manually and/or automatically. 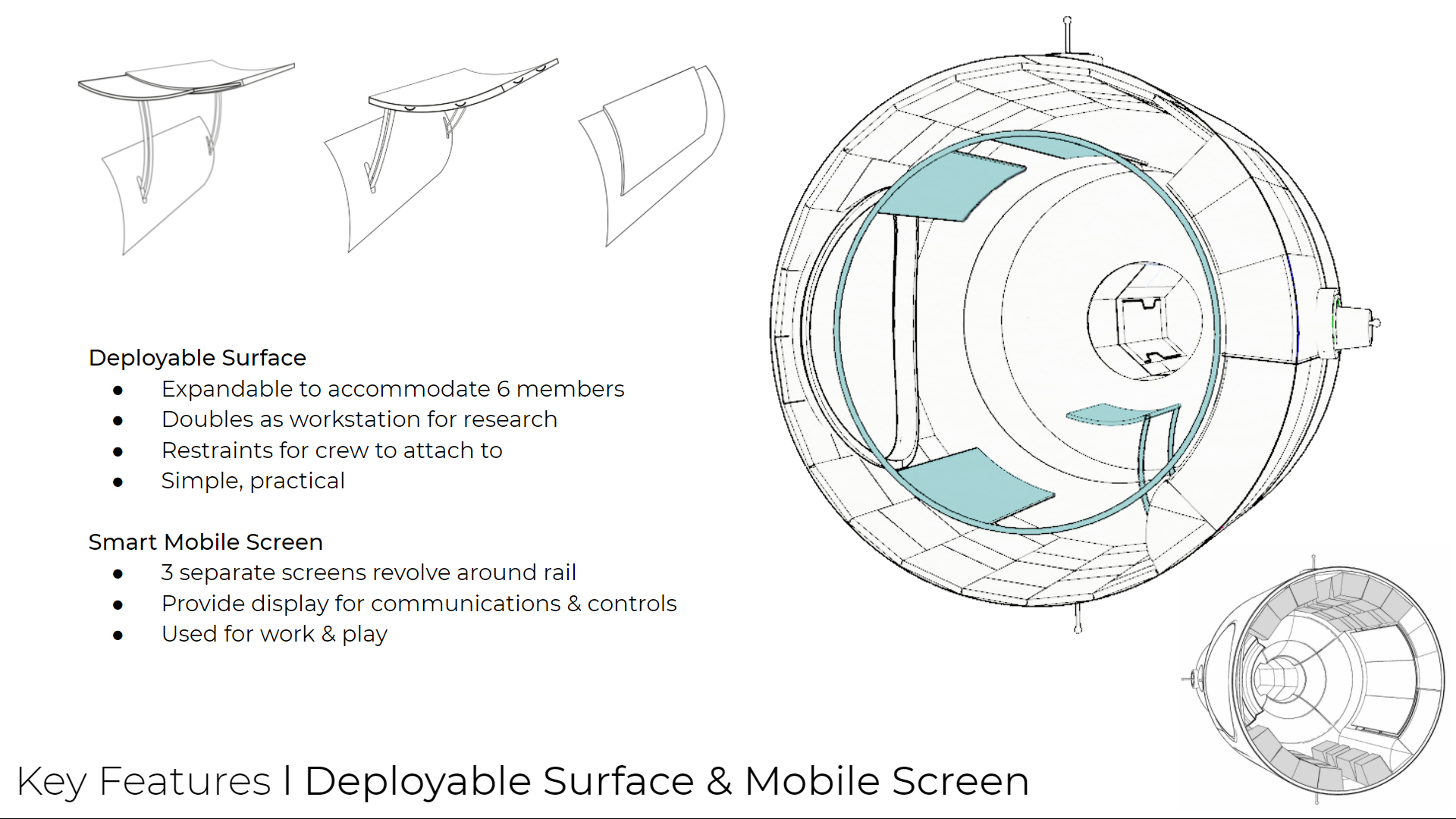 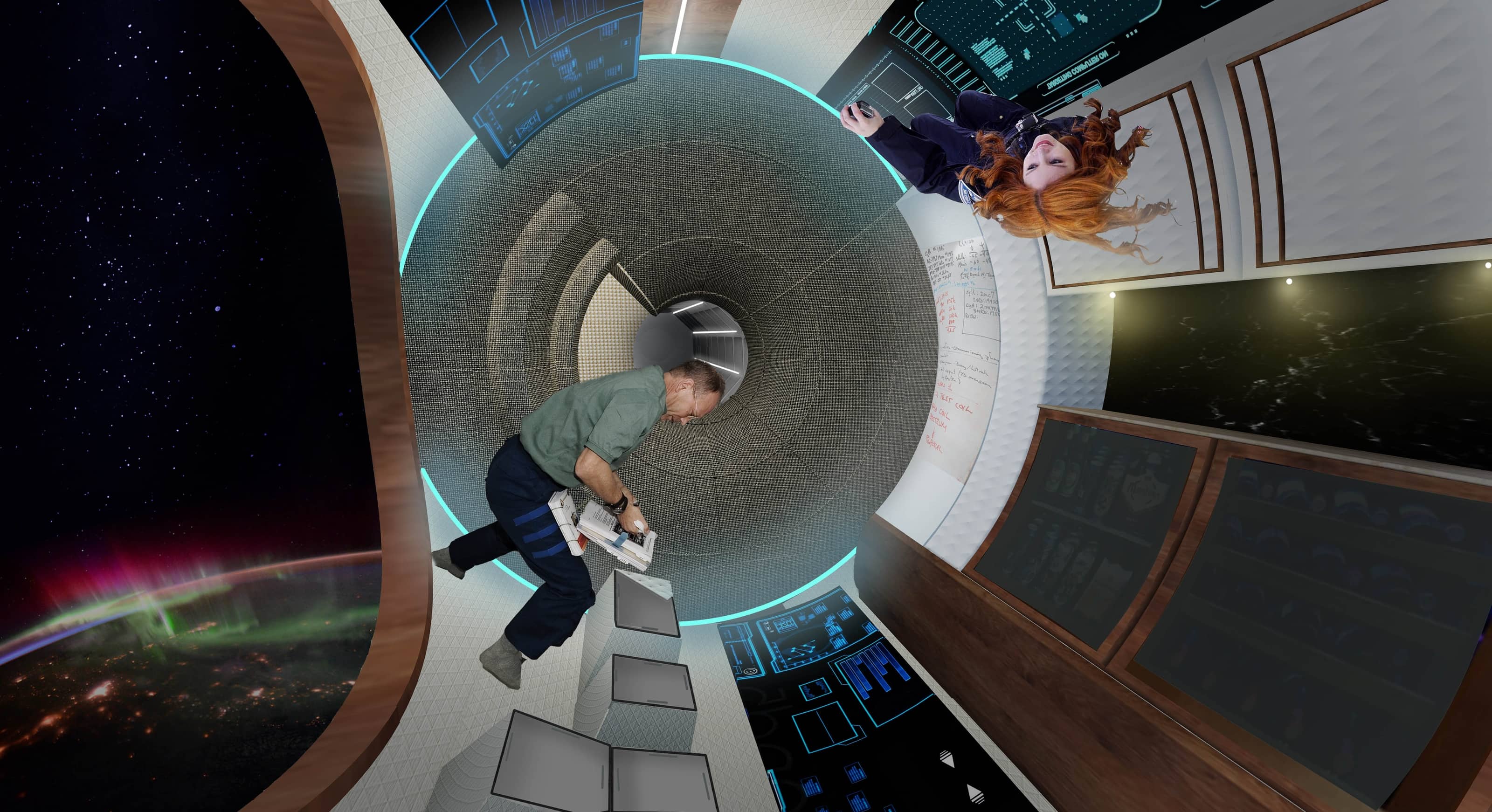 Through this rigorous design exercise, we developed comprehension of the feasibility of dual-use commercial space stations like the Almaz that are turning into reality through the commercialization of Low Earth Orbit (LEO). Although the user groups had conflicting functional requirements within a very restricted volume, a balanced and cost-effective solution was achieved through careful planning and architectural design.
SUMMARY

Let's connect and discover
how we can collaborate.

Someone from our team will be in touch soon.